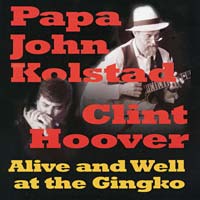 You say you love a live concert but hate the crowds? You want some old-fashioned blues and some rock ‘n’ roll, too, but you don’t want to dig out your vinyls? You like hearing performers banter with the audience and each other, but you don’t actually want to leave the house?

Then Papa John Kolstad and Clint Hoover have a treat for you: 14 tracks, more than a full hour, of down-home and back-in-the-alley blues, bluegrass and country, all from one solid performance, Alive & Well at the Gingko. There are songs about hard-headed and otherwise unreasonable women, like the smiling “It’s Too Short,” about a man who just can’t keep up his playing long enough to satisfy, and “Fishin’ Blues,” which sees a wife left behind for fishing trips finding her own game. There are a few songs about something else entirely, like “Born in the Desert,” inspired by a fan who made a request for an original tune — at gunpoint, and “Beans Taste Fine,” written by that great wordsmith Shel Silverstein. There’s the slow lazy “Wee Midnight Hour” and “Crowing Rooster Blues,” the jaunty “Freeze to Me Mama” and “Mill City Blues,” rocking along at the speed of a steam engine. Alive & Well at the Gingko can go dark blue and dangerous for “Alabama Woman” and settle down to “Leavin’ the Blue Behind” in the tap of a string. For those missing a bit more of the concert experience, there’s even an audience participation song, “Stop That Dancing Up There,” sure to get even a crowd of one caught in the call and response.

Through it all, there are Kolstad and Hoover themselves, turning the least twist of tune into a full-on performance. Hoover’s harmonica wails and chuckles and burns its way along the music, leaping ahead of Papa John’s deadpan guitar with its straight-faced delivery. Papa John delivers his lyrics with clarity, humor and a strange sort of civility that never even approaches formality, turning the cruder songs coy and giving the melancholy songs the grace of a hymn. The recording perfectly balances both artists’ contributions, letting each one shine without overpowering the other, something difficult even for studio albums.

But Alive & Well at the Gingko is a pure concert album, if not quite a concert. There’s no drunk to spill beer down your back, no fight for parking and no need to worry about remembering the lyrics when the replay button is right there on the CD player. But if you go to concerts for the music, to listen to some songs and hear a few of the singer’s road stories, Alive & Well at the Gingko may be better than the real thing.

Papa John Kolstad and Clint Hoover “Alive and Well at the Gingko”
Peter Krampert, Author, The Encyclopedia of the Harmonica

This one is called “Alive and Well at the Gingko” by Papa John Kolstad and Clint Hoover. It’s a really choice listen. Kolstad is a guitarist who really knows his way around the fretboard and Clint relies heavily on the Diatonic on this one, though there is some really great chromatic playing as well. The music is definitely Americana Blues and there are some really great old gems as well as a couple of nice originals. Especially notable is Clint’s harmonica on the song “Mill City Blues”. As always, Clint shows us that he’s a real force to be reckoned with on the harmonica and this CD shows us how easily he can swing from one genre of music to another. Definitely worth listening to.”

OVERVIEW
Papa John Kolstad is considered to be a folk/blues legend; Clint Hoover is a master of the harmonica. When the two of them perform together, the sparks fly. This is a recording of an evening of excellent guitar/harmonica blues with seasoned vocals. Papa John, master of 12 string guitar provides rhythm, bass runs, and fast picking; complemented by Clint Hoover’s stunning harmonica playing.

Alive and Well at the Gingko is aptly named in that it captures the energy, spontaneity, good time fun and instrumental prowess that is the hallmark of a live concert by these two experienced music veterans.

Clint gets to stretch out and demonstrate his acoustic blues chops on the diatonic harp (with a few forays into chromatic harp as well), while Papa John demonstrates his consummate mastery of the medium with the package deal of singer, guitarist and front man. This CD is the next best thing to being front row center at one of their engaging concerts.